NICEVILLE – A woman was arrested for aggravated assault after she pulled out a pair of scissors during an argument with her husband and threatened to kill him, according to a Niceville Police Department arrest report.

And while she said it may not be perfect, it’s a bold step in the right direction.

”It’s like the back of the refrigerator. You see all these wires and the rest,” said Pelosi. “All you need to know is, you open the door. The light goes on. You open this door, you go through a whole different path, in terms of access to quality, affordable healthcare for all Americans.”

Myself not being female, the sex of her idiocy doesn't bother me as much as it did Neo.

But the sheer bug-fugging-stupidity of that statement does.

She is the Speaker of the House of Representatives. She's the Senior Official of a LEGISLATIVE BODY. The people that are supposed to worry about the nuts and bolts. Understand how things work and plan for unintended consequences.

No, that's not all you "need to know". That might be all she wants to talk about. I wonder why.

So let's see what that attitude leads to, with the instant classic:

Here it's not even as annoying when he admits he doesn't know and doesn't care - hell, that's not a secret or anything new.

The annoying part came when he announced that his comments were "taken completely out of context." From his press release: "If it had of been, I would have never voted for a bill that I knew would be unconstitutional," he said. "I took an oath to defend this Constitution. I will continue to do that. I served six years in the military. I'm saddened that this gotcha-type politics has to happen."

So he served 6 years in the military. Which has exactly, what to do with the fact that he cannot answer the question? When he tries to use his (I have no reason to doubt his honorable service, other than his current weaseling) prior service to somehow deflect from the question asked him, it tells me that's he's lying through every method available to him. (And thus calling his other oaths and obligations into question, including that prior service.)

Granted, it's a question that should be asked much, much, much more of many more politicians. (I'd love to see McCain justify McCain-Feingold in the context of that little nit "Congress shall make no law... ")

But when the mantra is “All you need to know is, you open the door. The light goes on. You open this door, you go through a whole different path, in terms of access to quality, affordable healthcare for all Americans.”, from the Speaker of the House, can we be all that surprised at the contempt for the voter, the taxpayer, and the contempt for the form of Government and the Constitution from the other members of the House?

AKA: Guess you're not "eating your own dog food".

This bill is something that many “moderate anti-gunners” are in favor of because as watered down as this bill is even they can support it! That’s why anti-gun politicians Senator Mike Gronstal and Representative Kevin McCarthy introduced this bill for the NRA last week.

Because of all of your emails, phone calls, and trips to the Capitol the NRA bill is not moving as quickly as they would have liked. You see, your elected officials realize that Iowans both want and deserve the best gun bill possible – and that you don’t want to settle for anything less.

So yesterday the NRA did the unthinkable. The lobbyist that the NRA sent to Iowa, sent one of his subordinates to Representative Sorenson and gave him an ultimatum: either help us with our bill (and we will make you a hero in Iowa) or we will help your opponent in the upcoming election.

That’s right, an NRA lobbyist said that he was going to try to defeat a pro-gun Representative like Sorenson because he’s too………….pro-gun.

And, the opponent that Sorenson has in his upcoming election is a notorious anti-gunner!!!

So the NRA is willing to support an anti-gunner over pro-gun Representative Kent Sorenson just because he does not like the details of the NRA bill.

I really wish I were surprised. But we've seen this before, many times.

Just the other day I bit my tongue when someone at our range association meeting said "We ought to require everyone to be in the NRA, you've got to support the people who are doing the fighting."

That was probably a mistake. But I was tired, and didn't feel like arguing with another NRA apologist who'd argue from feelings, not facts. I gave in to practicality, rather than standing on principle. Well, you have to, you can't always be principled and unwavering. (Or, rather, not for very long, and you won't have many friends in your short time.)

But this shit needs to stop. Now, it's possible, this is bad information. That this is blown out of proportion.

But this sounds just like the other times I'm aware of that the NRA tried to kill legislation that allowed far more freedom than was their desire, or had been specified in their pet bill(s).

I've detailed in the past the NRA's PSH over the origination of shall-issue concealed carry - they only came around to it when it had been a winner for some time. And NRA fans and I have argued about Heller, and the NRA's attempts to derail that until again, it was a winner in the public eye. The "Katrina lawsuits" that the NRA joined (filed by the SAF) - and then took all the credit (and begging for donations), save in the next-to-last press release.

The NRA's not in the forefront of the fight - until it's obvious that the battle is being won there. Then they show up, and claim the credit. Or derail the attempts that they don't like, that they're scared of, that they fear might be used as ammunition against them.

That behavior, the spoiled-brat, scorched Earth, if I can't be in charge just cause, then take the ball and go home behavior is inappropriate for a organization ostensibly founded around an individual right.

Osama bin Laden has threatened to kill any captured Americans if the U.S. executes the alleged mastermind of Sept. 11.

Because before now... wait... they've killed all the Americans they've captured. It's kinda their MO. Their own, particular, idiom. Their reason-to-be.

So I guess they're now going to have to capture some, hold them in plush confinement and THEN kill them.

We'll rue the day, that's for sure. START RUEING!

This time it's a note that hits exactly my feelings about Ron Paul.

Sunday before last, about 5:30 AM, my beautiful wife Dixie woke me at 5:30 saying she "felt funny", and "something was happening" about every 3 minutes.

Grabbed the suitcases, we got in the car, and drove to the hospital. As we're driving, Dixie is starting to second-guess herself. It's probably nothing. They'll send us home.

We walked up to the Labor and Delivery, and called on the phone outside. The nurse who answered was ecstatic - we were the first people in all night! - and unlocked the door and led us into a room (#4! Not the #3 they'd put us into for observation 3 times. Not a big deal, but it was reversed from #3, and we'd gotten used to it.)

So they hooked Dixie up to the monitors and said "It's probably nothing, this is a little early, but we'll make sure and keep you here for a couple of hours." So we're waiting in the darkened room, and I'm trying not to yawn, when she tells me to just take a nap.. then her eyes get wide, "I think my water just broke!"

So I hit the call button and the nurse hustled in and she said "Oh, that's probably not it, the jelly probably warmed up." She got the litmus paper, and tested - and it didn't turn either positive or negative. "Huh. Cough. OH YEAH, WE'RE HAVING A BABY!"

And away we went. I'll write more later, the doctor was abysmal. The nurses were sublime. Dixie was amazing, and a real trooper. 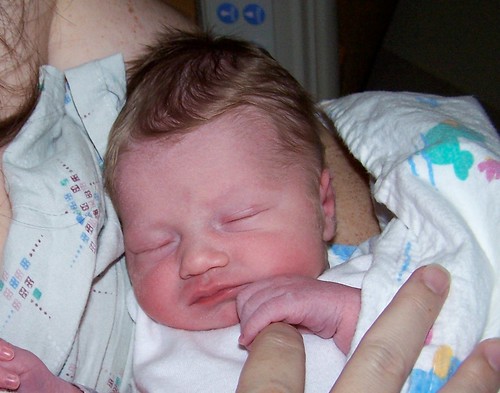 Gee, now he's got a problem with presuming guilt without (much less in the face of exculpatory) evidence? Too bad he's still on record with the Mexican Gun Canard.

Luckily for _him_, he's an "Only One" and the Border Patrol "rescued him".

I guess Instapundit will be rattling his tipjar again shortly.

ernunnos said on #GBC:
<ernunnos> sorry, anyone who sics the state on me deserves everything he gets
<ernunnos> see "petard: hoisted by"

Numerous places have been exploding the scandal that's resulting from the leaked emails from the supposed Climate Research Unit.

A good place if you're unfamiliar is Bishop Hill. In a perfect case example to why the technically-inclined should be respected, the now-renamed East Anglia Emails presents the emails in a searchable database.

Much more is coming out from the data files, but that will take longer.

But what I'm wondering...

Are Niven, Pournelle and Flynn going to get royalties, and why haven't they been interviewed for their foresight?

Synopsis of the novel: the Greens have taken over, and restricted carbon output with a central overreaching government. Even though a ice age has started. They ruthlessly chase down and punish dissenters, claiming they're saving us from "Global Warming".

Science Fiction isn't supposed to be this accurate.